We were engaged to perform a fluid structure interaction (FSI) study on a mixing tank using computational fluid dynamics (CFD) and finite element analysis (FEA). The client's previous mixing tank buckled under the thermal stresses induced by its cooling jacket. The client has since redesigned the mixing tank, but would like to simulate the thermal-induced stresses on the new design using FSI analysis to ascertain whether the improved tank will buckle before commencing fabrication.

Computational fluid dynamics (CFD) is the science of predicting fluid flow, heat transfer, mass transfer, chemical reactions and related phenomena by solving the mathematical equations which govern these processes using a numerical process. Fluent solvers are based on the finite volume method where a domain is discretised into a finite set of control volumes or cells. The shape of each individual cell is dependent upon the domain geometry. For 2-D modelling, the available shapes are triangle or quadrilateral.  For 3-D modelling, the shapes available are tetrahedron, hexahedron, pyramid and prism/wedge. Finite element analysis (FEA) is a numerical based method in predicting how a system or a component reacts to structural and thermal load. In FEA, the physical system is discretised into elements and nodes containing material properties and information. These nodes are then solved simultaneously across all elements based on a set of governing equations. As one of the leading FSI simulation consulting firms within the Asia Pacific Region, our FSI analysis specialists employ FEA to perform structural analysis or together with CFD to perform fluid structure interaction analysis.

The main objectives of this study are as follows:
- Perform a CFD study on the fluid phase of the system (flow inside the cooling jacket) to obtain the transient temperatures induced by the fluid phase on the solid phase. To achieve this, a transient simulation will be performed to model the feeding of coolant into the tank jacket using ANSYS Fluent. As it starts from the bottom, this part of the tank will be subjected to -15⁰C first whereas the top part remains at room temperature.  Hence, this simulation will provide the data to be used as the boundary conditions for the FEA simulation component. This will take into consideration the flow rate of coolant and room initial tank temperature.

- Perform a stress and displacement analysis on the solid phase (the tank) using the FEA method and the transient temperature results from the CFD study as inputs. To achieve this, a one-way coupling structural analysis using ANSYS Mechanical will be conducted by importing the transient temperature distributions impacting on various part of the tank, obtained from CFD post-processing. This part of the simulation will take into consideration all the structural physical properties of the tank.

As shown in the figure below (left side) the tank geometry was created using ANSYS Design Modeller. To render the geometry suitable for simulation, selected elements of the original geometry were defeatured to avoid low quality mesh elements for both the fluid and solid domains. These features were deemed to have minimal impact on the CFD and FEA relevant results. After the geometry was created, it was meshed using ANSYS Mesh as shown in the figure below (right side). Mesh generation is one of the most important steps to ensure a highly accurate and reliable result. To ensure the results are accurate and mesh independent, a mesh independence test was conducted on the geometrical model. Two meshes of differing cell densities were generated for each of the CFD and FEA simulations. Then simulations were ran on each of this mesh and the results compared to each other.​ 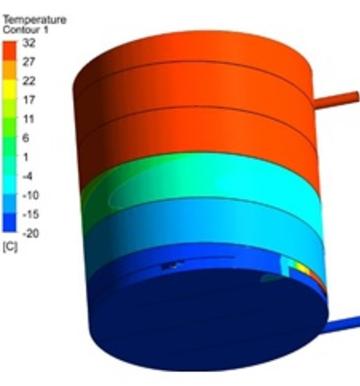 ​​FEA Simulation - Stress Visualisation (von Mises)
The figure below shows the equivalent (von Mises) stress magnitudes of the tank due to thermal stresses induced upon it at various points within the first 20s of coolant injection. Shown for each point in time are: Temperature distribution of Propylene Glycol in the mixing tank cooling jacket (top left) and equivalent stress magnitudes at the Outer Shell (top right), Inner Tank (bottom left) and Inner Tank Cross Section (bottom right) of the mixing tank. 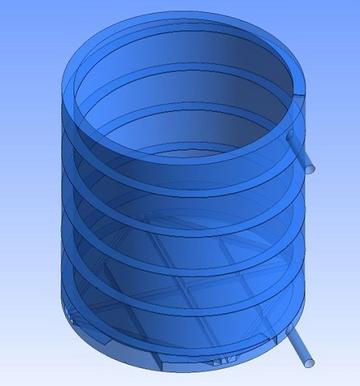 The figure below (left side) provides a detailed picture of the location of these high stresses, which were shown to localise around the vertices of the leg support/lattice structure interface. The high stress concentration at these locations is as expected since the faces that made up this interface consisted of many sharp right angles. The figure below (right side) shows the contour of equivalent (von Mises) stress, regions at the base chamber of the tank with stress magnitudes almost approaching the yield stress of stainless steel occurred within 6s after the injection of the coolant. The continual subjection of such thermal induced stress may eventually compromise the structural integrity of this part of the tank. 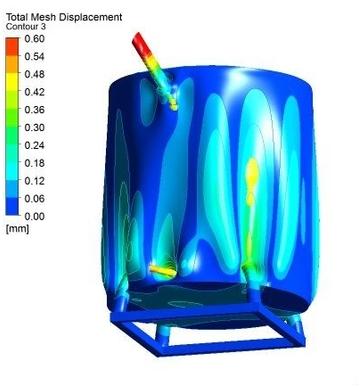 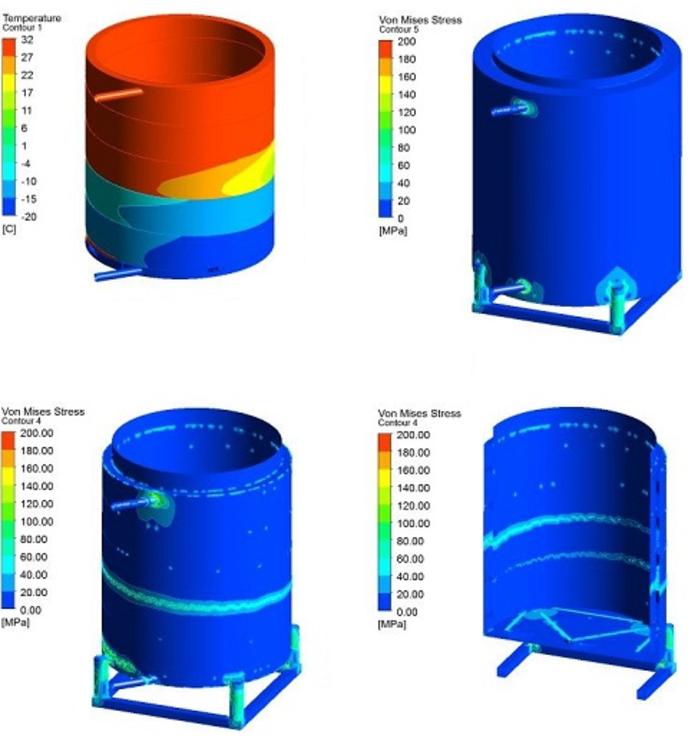 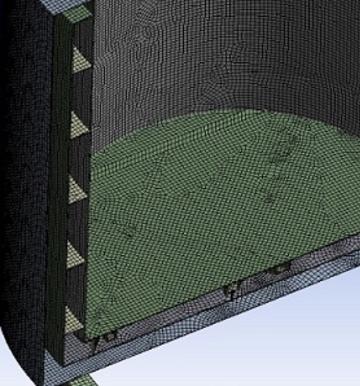 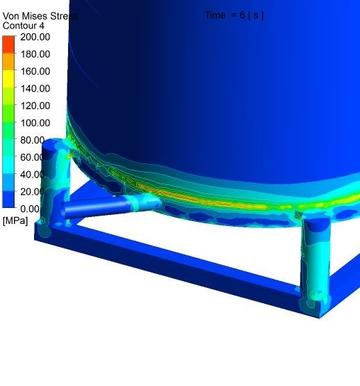 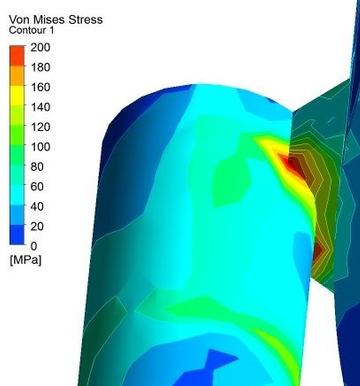 A fluid structure interaction (FSI) study was performed to ascertain whether the injection of propylene glycol coolant at -15⁰C into the Washed Oil Chiller tank cooling jacket will cause the tank to buckle under the severe thermal loads induced. From the simulation results, it was observed that whilst the tank would not buckle significantly under these extreme thermal loads, as evidenced by a maximum deformation of less than 1 mm, several areas such as the leg support/lattice structure interface and cooling jacket base chamber were identified to experience stress levels that exceeded the yield stress of the stainless steel tank construction material. Based on the results analysed and observed, the fabrication of this tank was not recommended. It was further recommended that a design review supported by the results of this study be conducted and have the highlighted problem areas addressed.