​​An explosion can be defined as a very fast chemical reaction involving solid, dust or gas, during which a sudden, rapid and violent release of energy occurs. This phenomenon lasts only several milliseconds and results in the production of very high temperatures and pressures. During detonation, the hot gases that are produced expand to occupy the available space, leading to wave type propagation through space that is transmitted spherically through an unbounded surrounding medium. Along with the produced gases, the air around the blast, particularly for air blasts also expands and its molecules become compacted, resulting in blast wave and shock front. The blast wave contains a large part of the energy that was released during detonation and moves faster than the speed of sound.

The figures on the right show the contour of pressure magnitude of an explosion occurring in a metropolitan area and the structural damage from the blast wave sustained by one of the buildings. The pressure surrounding the element is initially equal to the atmospheric pressure before undergoing an instantaneous increase to a peak pressure at the arrival time when the shock front reaches that point. The peak incident pressure is also known as the peak overpressure. The value of the peak overpressure as well as the velocity of propagation of the shock wave decrease with increasing distance from the detonation centre. After its peak value, the pressure decreases with an exponential rate until it reaches the atmospheric pressure. Above the atmospheric pressure, the pressure-time diagram is called the positive phase duration. After the positive phase of the pressure-time diagram, the pressure becomes smaller (referred to as negative phase) than the atmospheric value, and finally returns to it. During this phase, the structures are subjected to suction forces, which is the reason why sometimes during blast loading glass fragments from failures of facades are found outside a building instead in its interior.

There are several three (3) kinds of energy which may be released in an explosion, namely: (1) physical energy, (2) chemical energy and (3) nuclear energy

Physical energy may take such forms as pressure energy in gases, strain energy in metals or electrical energy. Examples of the violent release of physical energy are the explosion of a vessel due to high gas pressure and the sudden rupture of a vessel due to brittle fracture. Another important physical form is thermal energy. This is generally important in creating the conditions for an explosion rather than as a source of energy for the explosion itself. In particular, superheat in a liquid under pressure causes flashing off of the liquid if it is let down to atmospheric pressure.

The magnitude and distribution of blast loads on a structure are governed by several factors, namely:

- Explosive properties: type of material, energy output and quantity of explosive
- Location of the detonation relative to the concrete structure
- Reinforcement of the pressure pulse through its interaction with ground and concrete

often above 100psi
- Pressures from an explosion decay rapidly with distance from the source hence, direct

- The duration of the event is very short, measured in thousandths of a second or 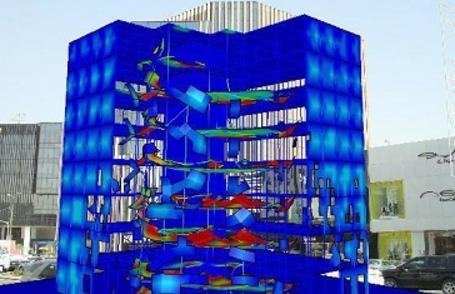 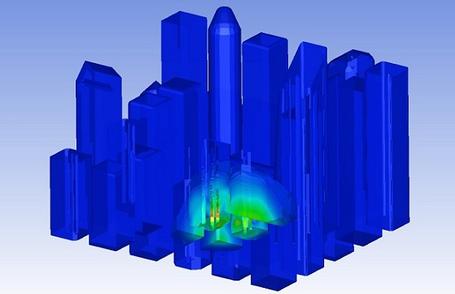 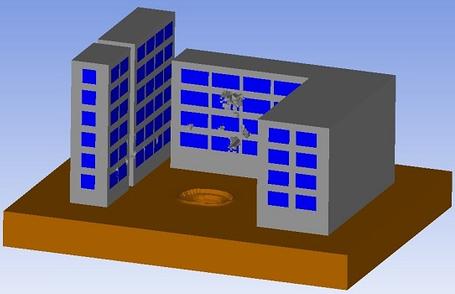 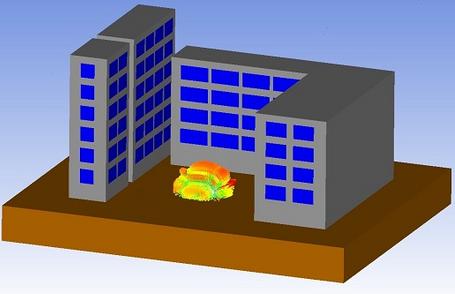 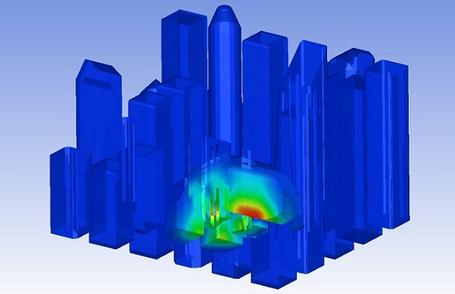 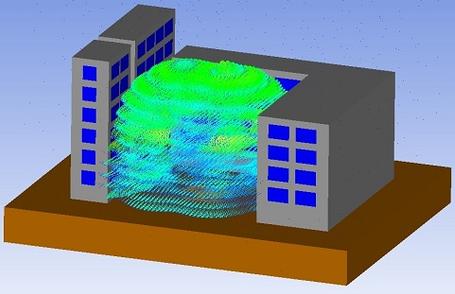 ​​​​​​​Through our blast mitigation design services, our blast consultants will identify the principal components of risk, analyses their relative magnitude and provides guidance to building owners with respect to cost-benefit decision making. Our blast consultants will deliver reports which address the following topics: (a) preliminary facility design development, (b) threat, consequences, vulnerability and risk assessment, (c) blast effects analysis, (d) structural resilience study and (e) security protection plan​​​​​. In evaluating any protective measure, our blast consultants will consider numerous factors so that realistic outcomes are accurately determined. Key factors include (a) threat, (b) target and (c) intent.

Threat: credible threat must be considered. For normal security applications, we will evaluate (unless otherwise directed by the client) the effects of homemade explosives (HME) and improvised explosive devices (IED). These systems are typically low yield in terms of 2,4,6-trinitrotoluene (TNT) equivalence but is sufficient to produce high blast output capable of significant damage when deployed against ordinary commercial structures. The evaluation takes into account whether the IED is man-portable or vehicle mounted (on motor bike, car, delivery van or large truck) and whether the device is to function with stand-off from the target, in contact with or inside the building. Location as well as size and type of weapon are crucial in determining the severity of damage caused. In our modelling, we will take into account both the effects of blast and fragmentation from structural failure.

Target: materials of construction and building design are crucial aspects when considering response to shock loading from blast as well as fragment produced by failing structural components. Key considerations are the protection of personnel and the protection of business infrastructure. This includes whether protective measures are installed as retrofit or during construction phase. Overall security assessment must include not only mechanical aspects of existing or proposed architecture but also on-going security arrangements and installations.

Although the terrorists may aim for complete structural destruction, this is usually extremely difficult to achieve with improvised weapon systems. However, significant damage can still be inflicted on building and people from both the primary (weapon borne) attack and secondary effects (such as fire or subsequent failure of electrical or water systems). Only through a complete appraisal of the building, protective and security measures can a realistic business threat assessment be provided. Without this information the value of considering or installing any protective measure is diminished.  By performing an in-depth and thorough analysis, which includes sophisticated computer modelling, we can advise on security measures which represent the best value for money outcome for given threat levels whilst maximising protective effect. Within infrastructure resilience, our blast consultants have the capability to model, simulate and analyse the following items:

​The critical location of the threat is a function of the site, the building layout and the security measures in place. For vehicle-borne improvised explosive devices (VBIED), the critical locations are considered to be at the closest point that a vehicle can approach on each side, assuming that all security measures are in place. Typically, this is a vehicle parked along the curb directly outside the building or at the entry control point where inspection takes place. The first step in predicting blast effects on a building is to predict blast loads on the structure. For a detonation that is exterior to a building, it is the blast pressure pulse that causes damage to the building. Because the pressure pulse varies based on standoff distance, angle of incidence and reflected pressure over the exterior of the building, the blast load prediction should be performed at multiple threat locations. However, normally we employ the worst case scenario for decision making.

Our blast analysis will provide the most authentic representation of an infrastructure's ability to resist the dynamic blast loading and will produce the most cost-effective retrofits wherever the strength of the system is being evaluated. This principle of performing blast mitigation design supported by our advanced simulation approach means that our blast consultancy firm delivers an infrastructure protection design that is balanced. 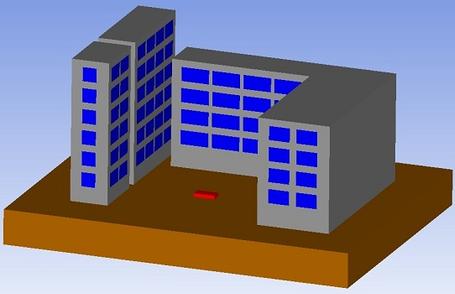 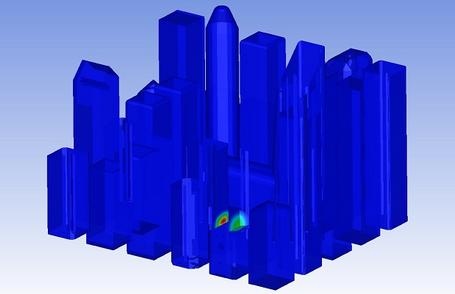 ​​​As experienced explosive blast consultants, we cannot help but realised that almost every day the media reports terrorist attacks in different parts of the world at times with dire consequences. Since the attacks on the United States’ World Trade Center, terrorism has become a significant concern for many governments and agencies. Whilst buildings represent an organisation’s major assets and wealth, many are constructed today based on relevant building codes that lack design considerations intended to prevent or mitigate the impact caused by an explosive blast. To enhance a building’s protection features, one approach is to use the conventional table & chart method, which employs a set of heuristics that the user can use to estimate the blast effects. A second method is to use modelling & simulation technology to predict the blast effects on buildings.

The table & chart method designed as a one-size-fits-all instrument aims to cover as many building features, sizes, shapes and scenarios as possible, may lead to under- or over-estimation. It is well established that one of the most effective mitigation measures against blast effect is the standoff distance, defined as the distance between the explosive charge and the target. If this standoff distance is underestimated, then protection of the building against blast wave will be inadequate. In contrast, if the standoff distant is overestimated, whilst the protection is adequate, the building owner will have to pay in excess of what is necessary to protect his building against blast effects in the form of land cost, which can be a costly penalty particularly in major cities of Australia. Despite this shortcoming of the table & chart method, it does not imply that it is now obsolete because a benefit of using such method is that it provides instant estimations. On the other hand, the modelling & simulation method offers bespoke assessment specific to a particular building’s features or scenarios and delivers much more accurate results than those obtained from the table & chart method. A typical application of this method is the blast effects analysis (BEA) which relies on the principle of fluid structure interaction (FSI). As the name implies, FSI involves the study of the interaction between the fluid phase representing the blast wave and the solid phase representing the building structures. On the fluid side, by factoring into the numerical model variables such as the mass, size, shape, orientation, location and other variables of the explosive charge, this method will compute and predict the impulse, defined as the intensity and duration of the blast wave produced by the explosive charge. On the structure side of FSI, factors such as location of the building, proximity to neighbouring buildings, building shape, orientation, height, concrete wall thickness, concrete compressive and tensile strengths, condition of building and reinforcement bars, windows to wall ratio, window anchorage, window glass types and other building features are factored into the numerical model. Then the simulation nonlinear transient algorithm will compute and predict how the building under assessment will respond to the impulse generated by the explosion.

From the results obtained, the following questions can be addressed: What is the degree of damage due to the blast wave and where are the damages located? Are the concrete walls and their underlying reinforcement bars capable of resisting the blast waves? Will the doorframe be effective in securing the door from being displaced? What is the degree of collateral damage on neighbouring buildings? What reinforcement design is required to ensure personnel working inside the building are protected? How effective is the reinforcement design to mitigate the risks identified?

Whilst the benefits of using the modelling & simulation method are obvious, a drawback of using this method is that it may take several days to obtain the results. Thus, a more balanced approach adopted by our blast consultancy firm is to combine these two methods, by first using the table & chart method to quickly conduct preliminary evaluations on many scenarios to shortlist the most probable scenarios. This is followed by using the modelling & simulation method to assess the shortlisted scenarios to obtain higher fidelity and accurate results. By combining the conventional table & chart method with the more advanced modelling & simulation method, our blast consultants can, within a reasonable time frame, perform blast effects analysis to obtain accurate results which represent the best value for money for a given threat level whilst maximising protective effect.​​​​